In this post I look at the demographics (sex and nationality) of the winners of the Hugo Award for Best Best Short Story.

I originally only intended to cover Best Novel, so sorry if things are a little disorganised. You can find a parent post for these little studies here.

The Best Short Story Hugo is awarded to a spec fic work under 7, 5000 words. It was first awarded in 1955 and since then has been awarded annually every year, except in 1957. For a period in the 60s it was called Best Short Fiction and I believe it may have cannibalised Best Novelette during this time (until Novelette escaped).

Since it’s inception 60 Hugos have been awarded in this category. The only shared win was in 1973.

10 writers have one more of this Hugo led by Harlan Ellison and Connie Willis on 4 and 3 respectively.

Only two nationalities have won this Hugo (!!!). The breakdown looks like this (it’s on wins, not individual winners);

As a consolation American women have won 10 wins (17%) – double the rest of the human race, which in this case is represented by five British male wins. 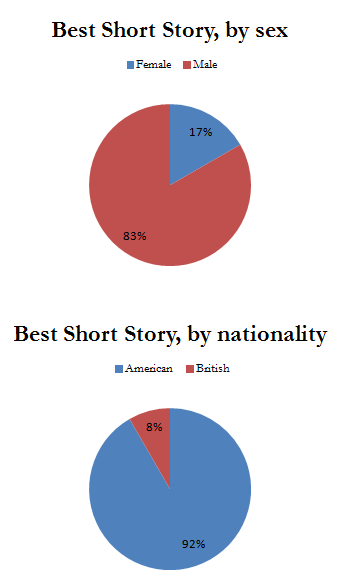 I basically just used Wikipedia. I’ve included the list I used below. I’m pretty comfortable with most of it, but please let me know if you spot any errors.

My rounding is always lazy, so if you see a tiny bit of flutter you know what happened.

I didn’t have any major concerns with this data set. I’ve probably still done something stupid though – so if you see something weird sing out in the comments.